Be Strong
“Do you think we should pay attention to that sign?” Rick says just a little sarcastically as he pedals up next to me.  “What sign?”, I gasp, as I down-shift.  He laughs. “Oh you know.  The huge one back there that reads, ‘Trail Closed’”.

We had been training for our big ride across Europe for about 2 weeks, but this was our first fully packed and loaded “shake-down cruise.” That means we are carrying everything we thought we might need for our upcoming adventure and riding the minimum number of miles we expected to be traveling daily. We chose a course with a difficulty of about a 5 on a 1 to 10 scale.  The math was perfect. It all worked out on paper. Park our car at a friend's house in Port Angeles, Washington, ride about 30 miles to the town of Sequim, Washington, on the gorgeous Olympic Discovery Trail, spend the night and then ride back the next day. An actuary’s dream. All the numbers added up to the ideal trial run. No problem.

Except this is the Pacific Northwest and the Olympic Peninsula no less.

We’ve seen plenty of road closure signs in the past and are frankly quite happy to get due  warning.  I mean, every cycling excursion we had in SE Asia always, and I mean always, had some sort of surprise. Trail ends suddenly at a newly constructed cement wall. Potholes that we nicknamed Elephant Footprints because they spanned the entire width of a road just beyond a blind turn. Or the trail that runs right through a military base and to continue, you must ride by the monkey-infested trees hoping they (the monkeys)  are friendly.  No, a sign is a good thing.  And what we’ve learned is that these signs, at least in the US, are set up about a mile ahead of whatever the problem is. Cause we’ve seen these signs before - a few times.

So what do we do? The obvious. We continue riding.

The Olympic Discovery Trail or ODT, is truly a gem. Starting in Port Townsend, Washington on the very eastern side of the Olympic Peninsula, it travels 130 miles to the Pacific Ocean near La Push, Washington. About 40 miles are fully developed dedicated bike paths. It has forest, farm lands, water views and mountain lakes. The paths range from single track dirt paths (nothing tricky) to asphalt lanes that are fully accessible. Some portions are along the highway, but even most of that section has very wide shoulders. There are just a few bits where it is not recommended for cycling.

As we continue to ride, the possibility of having to reroute is looming in our minds. The only other way to our destination is along the highway, one of those “bits” that is less than desirable for a bicycle.  We really need to make this work. And then we see it. And it’s not unusual for our rain-soaked corner of the United States. We are on a gorgeous section of trail that runs right along the Canadian border waters of the Straits of Juan de Fuca. There is a 50 foot cliff embankment towering above us on one side and the pristine beach just 10 feet below the trail on the other. It’s late winter, it’s been raining for months. Of course, a landslide.

So what do we do? We carry our bikes with an extra 40 pounds of gear up, over and through a muddy mess of rocks and branches and other debris. Feet soaking, bodies and bikes covered in mud, we hack our way through about 50 feet of mess.

And we continue our ride.

We spot three sea otters playing on a rock. The eagles are out in hordes. Tons of seals and sea lions. They are all playing in the temporary “no human” zone. And predictably we come upon another slide. This time, huge boulders and rocks that we are very careful traversing. My chain gets caught and pulls my derailleur. I’m lucky nothing breaks. Be careful.  We know we are in the clear when we spot a guy walking his dog.

That was the first 5 miles.

Now we just have that 12% hill to tackle.

We’ve been thinking about this hill for the past few days. It’s just one hill in the middle of a very hilly area.  It’s so steep that a sign at the TOP recommends cyclists walk their bikes DOWN the hill. Not only is it steep, it has a hairpin turn about half-way. It is so steep that every cyclist I have ever talked to that has ridden this trail, never fails to mention it. It  is so steep it makes the “Killer Hill” of everybody's youth seem just a little cute. That’s how steep it is. And did I mention we are each carrying about 40 pounds of extra weight? Did I mention that the first few miles of the trail had two landslides to traverse?

Two days before, at dinner, Rick had blurted, “I’m walking my bike.” “What?” I say. “Up the hill on our ride. I’m walking it.” So, for my non-cycling friends out there, this is a big deal. The biking community takes great pride in conquering difficult hills. This is the stuff of  tall tales told over cold beers. I heaved a huge sigh of relief because I too had been planning to “walk it.” Which we did. And, we were still very tired at the top.

Once you get through the hilly part, the trail flattens out into farmland. The pastoral beauty of horses and cows, fields of freshly turned earth, even an alpaca farm. As we are cruising, Rick and I start discussing our dinner options. We are really tired, our bums are yelling at us, we just want to finish this ride. But there's a little problem. Our hotel is about two and a half miles from the closest place to eat. Can’t Uber in Sequim - it’s just not an option.  We can eat on our way there but that means we have dinner at 3pm. We look at each other and Rick says, “We have to be strong”, a statement he has used during our entire 38 years of marriage. It’s a statement that means, we can do this, even if it totally sucks.  Because the old sports mantra, “the mind gives up long before the body”, is true.  If we put our minds to it and stick together we can do a lot of hard stuff.

We made it to our rather dumpy hotel about 3:30pm.  Wanting to get back before dark, we quickly dropped all our bags and immediately got back on our bikes to ride the two and a half miles (did I mention the big hill in that section?) back to the very fancy Black Bear Diner.  Riding without our gear, I felt like a butterfly! Light as a feather. Even on that other big hill.  Once arrived, we ordered and ate huge diner meals served by a nice waitress that called me “Hon''.  Then we  got back on our bikes and rode the last excruciating two and a half miles back to our lodging.  It was dusk by this time, and we were riding through a forested area. I couldn’t help thinking of all the animals that come out this time of day but luckily we didn’t encounter any.  I just didn’t want a mountain lion in this story.  It’s good enough.

Dropping into bed that night, I felt a wave of relief and pride. It would be a ridiculous understatement to say I’m a little apprehensive about cycling from Lisbon to Amsterdam. It’s a big undertaking on a lot of levels.  But, the physical aspect had been haunting me.

“We can do this.” I thought.  And with that, I took an Ibuprofen and fell asleep thinking of our ride the next day - same hills, same landslides but in reverse. Piece of cake. 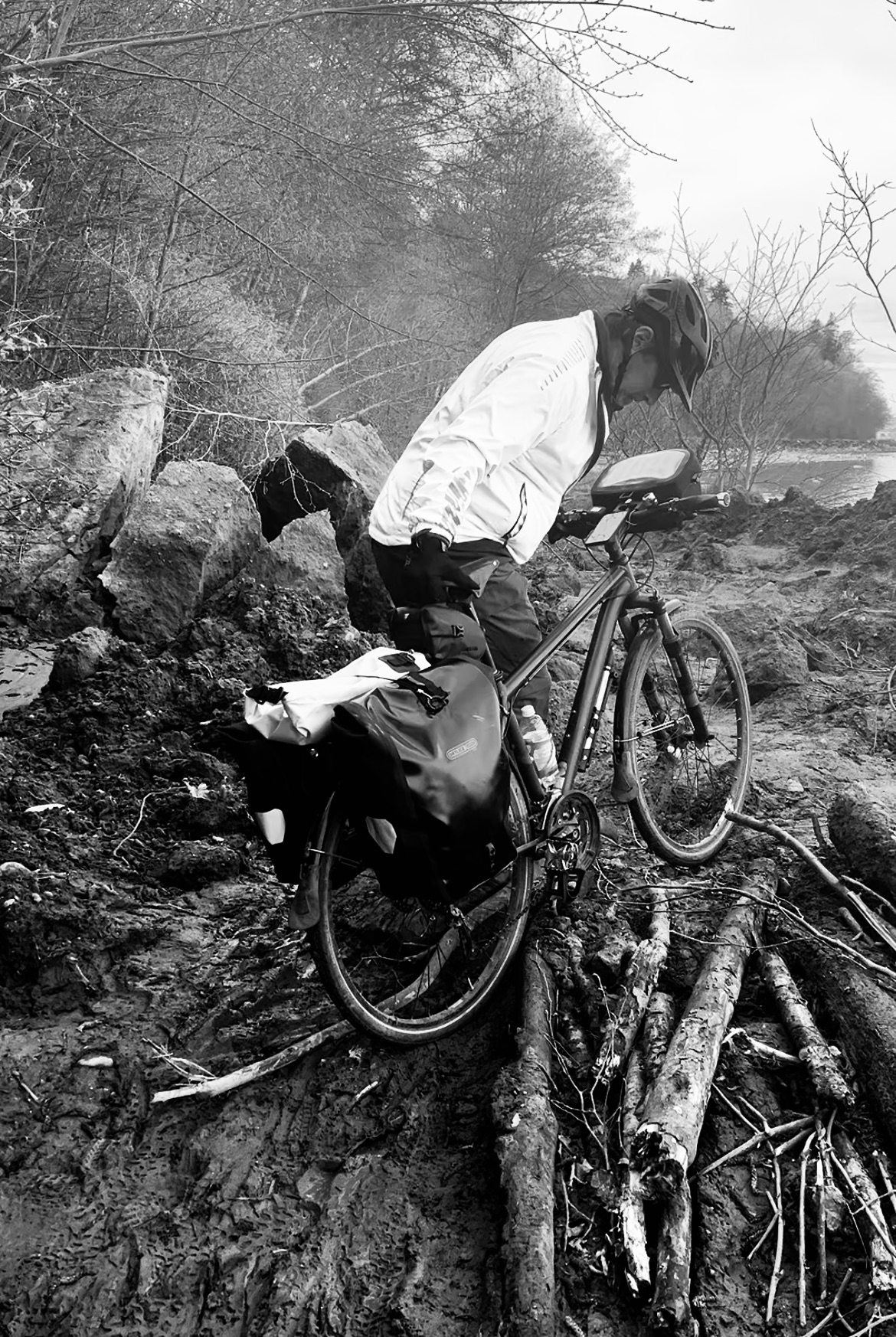 FP Promote:
Not on Front Page
Superior
Back to top
Donate
Logout
Join